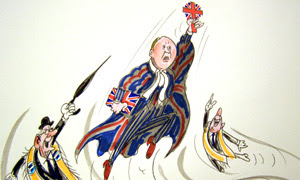 The defeat in a council by-election in Dromore has sent a stark warning to the DUP over power-sharing with Sinn Fein. Its first electoral test since the restoration of devolution, in a district considered a good barometer of unionist opinion, proved to be a disaster.

The by-election had been sparked by the resignation of a UUP councillor. In such circumstances an alternative UUP member could have been co-opted to serve the remainder of the term. But the DUP insisted on a by-election. Obviously, the party was confident of pickling up another seat. The contest would also enable the DUP to advance its broader objective of consolidating its leading position within unionism by eating further into the support of the UUP, and smothering the challenge of the Anti-St Andrews Agreement unionists grouped around Jim Allister’s Tradition Unionist Voice (TUV).

On the face of it the DUP was well placed to achieve both these objectives. It already held four out of five seats in that ward and in the last council election in 2005 had won over fifty percent of the vote. A repeat of that performance would have seen it romp home. In the event the DUP came a poor second behind the UUP.

Its support slumped from around 50 per cent of the total poll in 2005 to about 28 per cent. Though the UUP won the seat it did not increase its share of the vote. The decisive factor in this election was the performance of the TUV. It took almost 20 percent of the first preference votes cast over all, and nearly 28 per cent of the total unionist vote. Finishing third, its transfers went to the UUP and ended up eliminating the DUP. The fact that most of its transfers went to the UUP demonstrates the degree to which its supporters wanted to punish the DUP.

The Dromore by- election witnessed the DUP being deserted by a significant chunk of its supporters. Given the TUV’s unambiguous position on the St Andrew’s Agreement, this is clearly a vote against power sharing. It reveals that a solid block within unionism is still opposed to power sharing with under any circumstances, even under a settlement as favourable to unionism as St Andrews.

The DUP had been able to accommodate them through the last Assembly election when it did not firmly commit itself to going into government with Sinn Fein. The poor showing of the anti-St Andrews candidates also strengthened the mainstream belief the rejectionist element had been marginalized, and that most had fallen in behind Paisley. However, this assumption has come under strain recently. The first indication was Paisley being deposed as moderator of the Free Presbyterian Church, and the growing speculation over his role as First Minister and DUP leader. Now with the Dromore by-election result we have firm evidence of a revolt among the party’s supporters. If such a result was repeated elsewhere, and remember Dromore was considered to be a relatively moderate area, the DUP could be in serious trouble. The TUV has the potential to do to the DUP what it did to the Ulster Unionists.

There were two reactions from the DUP to the Dromore result. One was to be dismissive. For example, Ian Paisley described it as a "flash in the pan." The other was one of concern. DUP Executive Minister Edwin Poots conceded that there was “an underlying level of discontent.” The local MP Jeffrey Donaldson said: "there is a protest vote there that we cannot ignore. We have got to recognise that message." They both promised that the DUP would listen to its supporters.

While one bad election result won’t precipitate a crisis within DUP it does create restlessness within the party, and will encourage those who have been biting their tongue over the settlement to speak out. Indeed, Jim Allister in the wake to the Dromre by-election, made an explicit appeal to this layer, asking them to “ponder whether by their presence and acquiescence they are not propping up the very thing which concerns them.”

The DUP leadership for its part will try to assuage its wavering supporters by cutting out the “Chuckle Brothers” routines and toughening its stance towards Sinn Fein. However, it will be difficult for the DUP to pick with a fight party that won’t defend itself and continues to capitulate on every issue (such as the Irish language) that it once claimed to hold dear. It also won’t assuage those unionists who are offended by the very presence of nationalists in Government. The only other option for the DUP is to bring the whole settlement crashing down. Any more electoral shocks, such as a victory for Jim Allister in next year’s European elections, may leave them with little alternative.

The St Andrews settlement is not about to collapse, but after Dromore by-election it is looking unsteadier. Jim Allister could rightly crow that it was “a very unhappy St Valentine's Day for the Chuckle Brothers."
Posted by SD webmaster at 10:25 AM
Labels: peace process, Stormont, unionism

any chance i could get a URL of that photo you've used?

The image can be found at the address below

Excellent piece - If you've been getting some abuse even stronger proof of its value. Pity you ran it up before Ian Og fell on his sword. How long before Ian Mor goes? Who next? the other chuckle brother?

There's no doubt the deal won't fall because of Sinn Fein. The remark last week by Martin McGuinness that he deplored the siting of so much action in tv soaps in pubs was about as pathetic a statement as I've heard in a while. When he complained that 'something should be done about it' it conjured up the image of some old Tory duffer from the English Home Counties with his handle-bar moustache, blazer and cigar spluttering through his G & T. Then I thought - what exactly is the big difference between Paisley and McGuinnes on anything except under what flag they want to impose their reactionary social and economic agendas?

There is no doubt that the effects of this byelection defeat will reverberate for some time and Ian junior's resignation is partly a result of it. Congratulations on getting right the seriousness of his plight on a previous post.

Question- What's the chance of the DUP pulling out the Army Council card or using events like the Paul Quinn murder to show their base they can put Sinn Fein out to dry whenever they want? Or is logic of the power sharing that they can't?