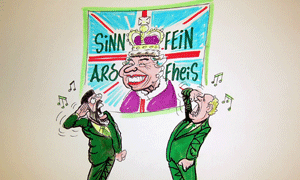 There was a great deal of speculation and concern surrounding the future of the party leader at this year’s Sinn Fein Ard Fheis. However, the party in question wasn’t Sinn Fein, and leader wasn’t Gerry Adams. It was Ian Paisley’s future as leader of the DUP that was the cause for concern.

In his address to delegates Gerry Adams warned that DUP hardliners were threatening the future of the power sharing agreement by pushing out Ian Paisley. He told them that it was "a sad commentary on the state of unionism that some were seeking to force a situation where 'Paisley must go'". Despite this threat Adams assured his party that the “process will prevail”. He said that “outstanding maters” such as the passing of an Irish language act and transfer of poling and justice powers would be secured. For him there was “no doubt whatsoever about that”.

However, the fretting over Paisley, demonstrates that clearly there is a doubt. The fact that the DUP has already rejected any progress on these “outstanding matters” also casts major doubt. With this background Sinn Fein’s assertions appear to be no more than wishful thinking. There was a tone of desperation in the claim by Martin McGuinness that they had been told by an unnamed senior member of the DUP that his “party would stand by the St Andrews Agreement." This was immediately rubbished by the DUP. Ian Paisley asserted once again that policing and justice powers would only be devolved when there was confidence within unionism.

Sinn Fein is now in the position of being reliant on the political heath of Ian Paisley to deliver what meagre concessions are on offer in the St Andrews settlement. Such weakness makes the claim by Gerry Adams that "we are closer to bringing about Irish re-unification than at any time in our past" even more pathetic. The announcement of a plan to establish a task force "to drive forward the roadmap to Irish unity" is just laughable.

Alongside this parody of republicanism, the Sinn Fein leadership also took the opportunity to abandon the last vestiges of social democracy within its programme. Gerry Adams declared that: ‘‘we need to generate wealth. We need to be competitive. That is the reality. Sinn Fein is not anti-business. Sinn Fein is pro-business. Neither are we a high tax party. We are a fair tax party.” The party leadership demonstrated their pro-business credentials by putting through a motion that abandoned Sinn Fein’s mildly redistribute tax policies. This was really formalising something that had already happened, as Sinn Fein had abandoned its tax policy in the first week of campaigning in last year’s Dail election.

This motion did provoke some opposition from Dublin members, but the leadership easily smothered this. The dissenting delegates were upbraided. In one particularly crass intervention a delegate from Newry told his comrades to “just wise up”. He reminded them that “the purpose of a political party is to achieve political office”, pointing to the north as an example of where Sinn Fein “are able to do things for the marginalised.” Maybe he had in mind the classroom assistant who had a pay cut imposed on them by Caitriona Ruane, or the households who will be receiving water bills from Conor Murphy’s department! While the sentiments of this delegate may have been expressed in a crude manner, they are probably an accurate reflection of the thinking within Sinn Fein.

The Sinn Fein Ard Fheis was yet another demonstration of the degree of decay within the provisional movement. It should dispel any notion that anything progressive can emerge from it.

Added:
Coming just two days on from its Ard Fhies, the announcement that Ian Paisley is to resign as DUP leader and First Minster, dramatically exposes the weakness of Sinn Fein’s position and also of the assumptions that underpin the St Andrews Agreement. Its basic premise – that Ian Paisley could win unionists to a power sharing agreement – has fallen through. His removal, while not fatal, will inevitably have a destabilising affect on the settlement.

More on the significance of Paisley’s resignation will follow soon.
Posted by SD webmaster at 7:07 AM
Labels: peace process, Sinn Fein