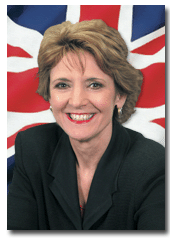 The recent anti-gay comments by Iris Robinson (DUP MP, wife of the party leader and first monster, and chair of the Assembly’s health committee) have highlighted for the umpteenth time the thoroughly reactionary nature of politics in the north.

This latest bout of bile was sparked a number of weeks ago when was Robinson appeared on Radio Ulster’s Stephen Nolan Show to comment on a homophobic attack on a man in the Newtownabbey area. Given the DUP’s well-known and long-standing position on homosexuality, and the presenter’s own publicity seeking approach, some sort of controversy was probably inevitable. In this respect Iris certainly delivered. After a halfhearted condemnation of the assault, she lunched into an anti-gay tirade that could only have given comfort to those who carried it out, describing homosexuality as “vile,” “disgusting,” “nauseating” and “an abomination”. She topped this off with an offer to refer homosexuals to the care of a psychiatrist friend who had helped gays to “turn away from what they are engaged in.”

These comments were a media sensation for a few days and drew some mild criticism from gay groups and politicians. But if people thought this was going to blow over they were wrong. Just a few weeks later Robinson was courting more controversy. Taking part in a radio discussion on whether the severe restrictions on abortion in the north should be relaxed, she argued that they should not on the basis that government had “a responsibility to uphold God’s laws”. This conjured up images of a Free Presbyterian version of Iran, with DUP ministers framing legislation in accordance with Ayatollah Paisley’s interpretation of the scriptures.

However, Iris still wasn’t finished. Just last week it was revealed that the First Minister’s wife told a House of Commons committe, during a debate on the assessment and management of sex offenders, that “there can be no viler act, apart from homosexuality and sodomy, than sexually abusing innocent children”. Maybe this was a little too strong even for the DUP, with Iris forced to back track, first claiming that her comments had been misreported (thy hadn’t) and then issuing a clarification. It turns out that what she meant to say was that homosexuality was only “comparable” to child abuse, and that she was “totally repulsed by both.” Well that’s a big improvement. The fact is that Robinson’s comments are a form of incitement that can lead directly to the type of assault carried out against the young man in Newtownabbey. All this pious baloney about loving the sinner but hating the sin is just a cover for pure hatred and bigotry.

One reaction to the comments by Robinson is to portray them as an outburst from a particularly bitter individual. However, even a glance at the public record shows that such attitudes run right through the DUP. It was party founder and former chuckle brother Ian Paisley who pushed to stop homosexuality being decriminalised in the north with the ‘Save Ulster from Sodomy’ campaign. It was Paisley’s wife, the recently ennobled Eileen, who led the campaign in the House of Lords to oppose anti-discrimination legislation. Their son Ian Jnr also got in on the act when, as a junior minister with responsibility for equality, he stated that he was ‘repulsed’ by gay men and lesbians

And there’s more - such as DUP councillor Arthur Templeton, who was found guilty of harassing a gay colleague and ordered to pay £4,000 in damages. There’s Edwin Poots, who as a councillor in Lisburn tried to ban gay and lesbian couples from holding civil partnerships. During his period as sports minister he called the presence of Ulster’s only gay rugby team - the Ulster Titans- a form of “apartheid”. While in 2005 he remarked that homosexuality needed to be “overcome just like alcoholism and drug addiction”.

The views of the DUP on homosexuality, and on equality issues more generally, are consistent. They are, and continue to be, opposed to the very concept of equality, whether that is in relation to religion, race, politics, class, sexuality, gender or anything else. That they are now heading the Government really makes a mockery of claims, from Sinn Fein in particular, that equality is at the heart of the settlement. Indeed, its very stability depends on the DUP demonstrating that this is not the case. In this context Iris Robinson’s comments, rather than a rash outburst, can be seen as a calculated signal to its supporters than they have nothing to fear.

What this recent controversy has also demonstrated the extent to which gay rights activists have accepted the political approach of the peace process. In this schema the most bigoted views are legitimatised and their promoters accommodated. It is notable that there were very few calls for Iris Robinson to resign her position as Assembly health committee chair. In any liberal democratic system she wouldn’t have survived. But in the north she continues. Those who are the subject of her hate speech call not for her resignation but for her to engage in debate. They have even invited her to a Gay Pride event!
Posted by SD webmaster at 10:21 AM 2 comments:
Labels: anti-gay, DUP 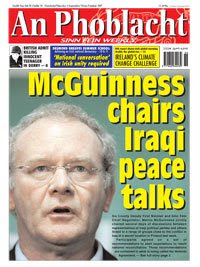 The recent mission by Martin McGuinness to Iraq is an indication of the extent to which Sinn Fein has been incorporated into imperialism. Once its implacable enemy they are now the trusted promoters of pro-imperialist settlements for conflicts around the world. The Irish peace process and their own political strategy are held up as models for others to follow.

The underlying assumption is that the peace process represents a resolution of conflict. Yet the reality is that it represents the complete defeat of the republican struggle for self determination. The traditional programme Irish republicanism has been completely turned inside out with Sinn Fein helping to administer British rule in the north. If there is a peace then it is because the British and unionist position is no longer being challenged. Indeed, the British state is now seen as a force for progressive change. In return for their acquiescence Sinn Fein gets a slice of the sectarian pie.

It is the airbrushing of imperialism and the definition of the conflict as one between two communities that makes the Irish peace processes a particularly appealing model for Iraq. This is reflected in the content of the McGuinness mission to Iraq with its emphasis on Sunni-Shia reconciliation. In this framework the occupation of the country by the US and Britain does not feature.

Although nominally independent this mission has the full support of the US and Britain. The Helsinki process (it took this name because first meeting of the group took place in the Finnish capital) has been carefully nurtured for over a year. In addition to Sinn Fein it also involves the ANC. The South Africans are veterans at advising on conflict resolution, having in earlier periods promoted their own settlement as a model for Ireland and Palestine to follow.

The culmination of this process was the meeting that took place in the Al-Rashid hotel within Baghdad’s heavily fortified Green Zone. Attended by the Irish, South Africans and a number of Iraqi factions, this produced an agreement that commits all groups to disband unlawful armed groups, respect the independence of the judiciary, combat corruption and support the constitution. It also says that factions should resolve discord by peaceful and democratic means and uphold equality for all citizens.

On the face of it this would seem to represent be some form of progress, but set against the reality of what is going on in Iraq it is a mockery. There is massive corruption, widespread sectarian violence and intimidation, and systematic abuses by the Iraqi Government. The greatest offence though is that the main cause of the strife that afflicts Iraq – its occupation by US and Britain – is ignored. This is particularly blatant at a time when the US is pressing Iraqis to accept a permanent military presence and open their oil industry to foreign ownership.

Unbelievably, Mac Maharaj of the ANC has described the process as providing Iraqi’s with a “platform to speak to each other without factoring in outside interests”. While Martin McGuinness predicts a groundswell of support that “may lead to a total end of the conflict in that country.” These are deceptions and dangerous ones at that as they can only advance the imperialist agenda for Iraq.

It is a testimony to the degeneration of the ANC and Sinn Fein that they should lend themselves to this. This particularly pertinent for the ANC whose settlement has been exposed by the recent outbreak of xenophobic violence. For its part Sinn Fein seem to be suffering from self deception as they trumpet the achievements of the Irish peace process. Flattered by being given the role of imperialism’s useful idiots they have completely lost any sense of political reality. This is reflected in the ludicrous boast by Martin McGuinness that pictures of himself with Ian Paisley “had a profound impact in Iraq”. Please!
Posted by SD webmaster at 5:08 PM 2 comments:
Labels: Iraq, peace process, Sinn Fein
Newer Posts Older Posts Home
Subscribe to: Posts (Atom)