DUP dumps Paisley Jnr – can daddy be far behind? 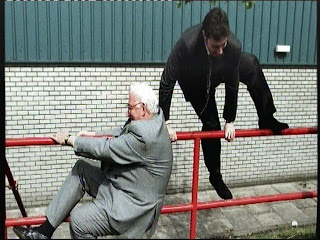 The first ministerial casualty of the power-sharing executive came this week with the resignation of Ian Paisley Jnr. His departure from the post of junior minister in the Office of the First Minister came on the back of yet more revelations about his financial dealings.

The latest one revolved around the rental of a DUP constituency office in Ballymena. A response to a freedom of information request disclosed that Ian Paisley Jnr and his father are each receiving £28,600 per year for the Church Street office. This combined total of £57,200 for one property is almost three times higher than the next highest MLA claim. It was further revealed that the mortgage for this property had been initially secured by developer and DUP member Seymour Sweeney. For a period he was the sole director of the company (Sacron) that purchased it. That company was subsequently transferred to Ian Paisley’s Jnr’s father-in-law.

Through the rental of this office, the Paisley’s were effectively giving a thousand pounds a week (claimed as expenses) to one of their relatives. Paisley Jnr stated that the money was being used by his father-in-law's company to repay the mortgage. However, given the extremely high rent being charged, it wouldn’t take long to pay off a mortgage. In a relatively short time period his father in law would own the property - any money accrued after that would be pure profit.

Another example of Paisley Jnr’s milking of the public purse came just last week with the revelation that he was receiving a salary as his father’s parliamentary researcher in addition to his MLA and ministerial salaries. He was taking three salaries for what is essentially one job.

However, these were just the latest in a series of controversies that surrounded Paisley Jnr during his tenure as a minister. Others included his St Andrews list that appeared to link the restoration of devolution to progress on a number of pet projects in his north Antrim constituency. There was the lobbying for a privately owned visitors’ centre at the Giants Causeway, and the attempt to influence a government department over the sale of public land. The developer and DUP member Seymour Sweeney was an interested party in both schemes. What is common to all of these is the accruement of benefits for the Paisley’s, their relatives and their supporters, at the expense of the public.

However, Ian Paisley Jnr’s dodgy dealings do not in themselves account for his resignation. He had given every indication that he would brazen it out. It was assumed that being the son the DUP leader and First Minister would protect him. There was no opposition from other parties to his continued presence in Government. This prompted SDLP deputy leader Alasdair McDonnell to ask: "Why was it always left to journalists to dig out the truth under the Freedom of Information Act?" Of course he did not offer an answer. This would have exposed the bankruptcy, not only of his party, but of the whole set up at Stormont.

What really did for Paisley Jnr was the opposition of senior members of his own party. This came to a head over the weekend at a meeting of six of its MPs to discuss the Dromore by-election defeat. They told Paisley to resign or face a party disciplinary hearing. Against this background Paisley’s resignation can be seen as the most immediate ramification of the DUP’s debacle. However, his probity was not the major factor in Dromore by-election. It was opposition to power sharing and the strong showing of Jim Allister’s TUV that damaged the DUP. The dumping of Paisley Jnr therefore has a political significance well beyond the immediate claims of improbity made against him. The whole basis of the St Andrews settlement is now in question.

He was offered up as a sacrifice to assuage that section of the DUP’s supporters who are now in revolt against its participation in the power sharing executive. The problem for the DUP is that opposition from this quarter is unlikely to be diminished by such gestures. Paisley Jnr’s resignation was immediately dismissed by Jim Allister. He said that it would “not be enough to redeem the DUP with the unionist electorate.” For him the “fundamental problem” was the “policy of having IRA/Sinn Fein at the heart of government.” He warned that unless this policy was reversed the DUP’s decline would continue.

The departure of Ian Paisley Jnr is undoubtedly a blow to his father. It diminishes his political authority and increases his vulnerability. All the criticisms attached to his son can be just as easily be attached to him. Paisley and his chuckle brothers’ routine is now the primary the focus of unionist opposition to power sharing.

Ten months ago Ian Paisley was considered to be at the zenith of his political career. He had triumphed over his unionist rivals, forced the disbandment of the IRA, and was sitting at the head of settlement that was very favourable to unionists. He was master of the political landscape. Now he looks to be on the way out – forced from the post of party leader and First Minister by a growing revolt among his own supporters.

This turn of events punctures the assumption which has underpinned the St Andrews (and the Good Friday Agreement before that) – that if a settlement had the endorsement of Paisley (or Trimble in the case of the latter) then unionists would accept it. The reality is that there remains a solid core of unionists who will not accept any form of power sharing no matter how favourable. They will not be appeased by the departures of the Paisleys or new faces at the top of the party.
Posted by SD webmaster at 4:48 PM
Labels: Paisley, peace process, Stormont

Yes, but will the rest of the political vested interests and the British government allow this to happen. Despite Allister's far right contingent there is still a lot of illusions in the benefits of Stormont out there, not least among the middle class and Trade Union bureaucracy. Arms length government also suits whitehall, at least until the knives they have handed to the various ministers have been wielded enough to decimate the public utilities etc. The question is, will the working class play a role in exposing the whole hypocritical charade, or will the extreme right get away with blaming it all on republican participation.

It looks more and more that for a left turn to take place the disintegration of republicanism has to proced until they are totally discredited. In Banbridge their vote held up and allies like Brian Feeney accept that the Paisleyite response to will be to kick the shinners hard and vote down the list of cosmetic reforms thay were promised at St. Andrews. Feeney assumes that this will make no difference to the Shinner base - he could well be right, the base is eiother paying no attention or so demoralised that they ahve withdrawn from politics

Yes Blender, I think the Sinner base is a complex mix of indifference, inarticulate resentment and unquestioning loyalty. They are getting a little frayed in some areas though.